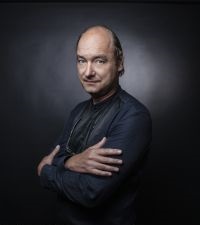 From 2006 up to 2017 Jan Willem de Vriend (1962) was chief conductor at Het orkest van het Oosten, formerly known as the Netherlands Symphony Orchestra. From 2017-2020 he is named 'Premier chef invité' of the Orchestra National de Lille. He became the principal conductor of The Hague Philharmonic and principal guest conductor of theOrquestra Simfonica De Barcelona | Nacional De Catalunya since 2015/2016.

In addition to having served as concertmaster with various ensembles, De Vriend developed a career as a conductor. Opera conducting has come to play a significant role in his career as a conductor. He has led Combattimento Consort Amsterdam in unknown operas by Gassmann, Rameau, Heinchen and Haydn, among others, as well as familiar operas by such composers as Monteverdi, Handel, Rossini and Mozart.

In addition to being the chief conductor of the Netherlands Symphony Orchestra, De Vriend has conducted many distinguished Dutch orchestras, including the Royal Concertgebouw Orchestra, the Netherlands Radio Philharmonic Orchestra and The Hague Philharmonic Orchestra. De Vriend is also a welcome guest internationally and has conducted orchestras in China, Germany, Austria, Italy and France.

Trombone in the 17th and 18th Century