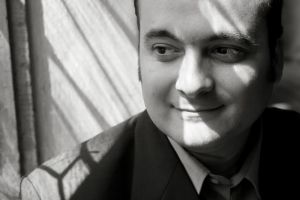 He studied piano, organ, harpsichord and composition at Palermo’s “V. Bellini” Conservatory, where he took the piano diploma in 2001 and the organ diploma in 2002 with full marks and “Cum Laude”.
He took part in many international master-classes where he developed his skills and taste for baroque music. His concert life began at age of 15, with performances as a soloist and chamber musician. In 2002 he moved to The Netherlands where he studied at the Royal Conservatoire in The Hague.
He took a Bachelor’s degree in organ with Jos van der Kooy and a Master in Early Music (harpsichord) with Ton Koopman.

His musical activity brought him to play in the most prestigious venues and festivals in Europe, USA, Canada and Middle East as a soloist/continuo player or director of his Contrasto Armonico.
Marco Vitale is the co-founder and musical director of “Contrasto Armonico”, baroque orchestra specialized in the performance of music in Italian style and baroque operas, using original instruments and historical performance practices. He is currently involved in the recordings of the Complete Italian Cantatas by Handel (formerly on Brilliant Classics, now on ayros), a thrilling project that will bring light on many undiscovered jewels of Handel which are neither edited nor recorded.

He appeared in radio and TV broadcasts in Netherlands (AVRO), Germany, Austria (ORF), Spain, Poland (Polskie Radio), Italy (RAI), UK (BBC) and Syria (Syrian National Television), and he participated in recordings for Alia Vox (Rameau, L’Orchestre de Louis XV), and Naïve (Vivaldi’s Teuzzone).
In 2012 he founded his own records label ‘ayros’, featuring recordings of Contrasto Armonico, with whom is continuing the project of Handel Complete Cantatas and starting new thrilling discographic projects. In addition to performing with Contrasto Armonico he also gives master-classes about baroque music throughout Europe and Middle East. From 2008 till 2011 he worked at the Higher Institute of Music of Damascus (Syria) for an early music development project.

He performs with ‘Le Concert des Nations’ of Jordi Savall and has been invited to conduct the Warsaw Chamber Opera.