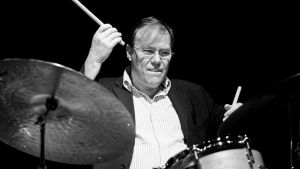 1988 programming first ‘TCB-night’ for Claude Nobs at the Montreux Jazz Festival at the ‘Q’s’ Jazzclub. 1989 participating in SwissTV-production ‘JAZZ IN’ with Cedar Walton, Gary Burton, Andy Scherrer and Marc Johnson.

Also in 1991 world tour with the George Robert quartet (during 6 weeks in USA together with Clark Terry), touring through 13 countries (USA, Canada, the Philippines, Indonesia, Bali, Singapore, Malaysia, India and the Middle East). A total of 65 concerts during 100 days for the celebration of the 700th anniversary of the Swiss Confederation (CH-91).

In 1998 receives SUISA prize for his work as a musician and jazzproducer. July 1999 programming another ‘TCB-Night’ at the Miles Davis Hall, for the Montreux Jazz Festival /Claude Nobs.

Peter Schmidlin was introduced in the 2000 edition of ‘The Biographical Enzyclopedia of Jazz’ by Leonard Feather and Ira Gitler (Oxford University Press).

2003 mentioned in latest edition of ‘Jazz-Lexikon’ (RoRoRo), most important Enzyclopedia of Jazz in Germany, written by Martin Kunzler.

2005 tours/concerts with the Thierry Lang Trio, sometimes including George Robert or Olivier Ker Ourio or Didier Lockwood or Paolo Fresu and Andy Scherrer as guests. Invited in May 05 by the president of Czekia, Mr. Vaklav Klaus, to play in the castle of Prague and in the famous Reduta Jazz Club (which Bill Clinton made famous in 94) with the Thierry Lang Trio and George Robert.

2006 release of another Blue Note CD with George Robert, Thierry Lang and Heiri Känzig ‘Wing Span’ and various concerts in Switzerland/ Austria and Germany with same group. July 06 concert with this quartet plus saxophonist Bob Mintzer in Geneva.

2007 release of the latest CD with Thierry Lang on Blue Note ‘Dedicated to You’. Concerts and club-dates with same Trio. Concerts with Cojazz and singer Alice Day. Tour with ‘Twobones’ feat. Dado Moroni to celebrate 20 years of existence of the group ‘Twobones’. Concerts with various soloists, such as John Marshall, Ferdinand Povel, Rob Barga, Caroline & Herman Breuer and the Chuck Manning quartet plus David Lynx and Glenn Ferris and others.