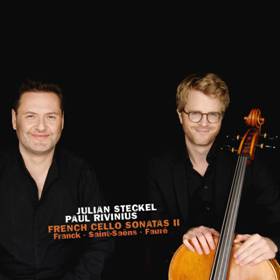 César Franck, Gabriel Fauré and Camille Saint-Saëns not only have their Frenchness in common, but they were almost of the same generation. Born in 1835, Saint-Saens was admittedly the teacher and mentor of Fauré, who was ten years younger. Franck, the eldest of the three, was born in 1822. As children of their time, all three were strongly influenced by the (French) music of the 19th century. With careers lasting well on into early Modernism; they came to be regarded as forerunners – and also antipodes – of Debussy and Ravel, without being reduced to that role. In reality, each one of them was a truly independent creator.

"I have most definitely added Steckel to my short list of favorite living cellists, alongside Bailey, Isserlis, and Colin
Carr, and will most definitely be on the lookout for any new releases by him."
Fanfare 11-2011 Lynn René
Bayley