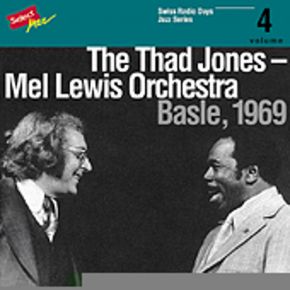 This live concert, broadcast over Swiss radio and released for the first time on this 1995 CD, features the Thad Jones/Mel Lewis Orchestra at its prime. The remarkable all-star group includes two first trumpeters (Snooky Young and Al Porcino) and such soloists as trumpeters Richard Williams, Danny Moore and Thad Jones, trombonist Jimmy Knepper, Jerome Richardsonon soprano, Jerry Dodgion on flute and alto, baritonist Pepper Adams, pianist Roland Hanna, bassist Richard Davis and tenor great Joe Henderson whose short stint with the band was long enough to include this European tour. Highlights of the superior set include "Second Race," "The Waltz You Swang For Me," "Don't Get Sassy" and "Groove Merchant." Highly recommended to fans of the band, this Swiss CD can be found with a bit of a search.