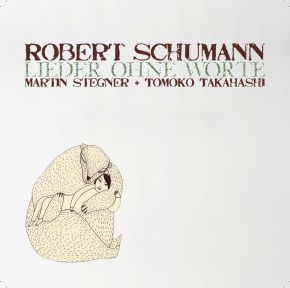 The idea came from fellow viola-player Tabea Zimmermann. Many years ago, Martin Stegner had heard a recording of her playing Franz Schubert's Winterreise song cycle and had been enchanted. Because the viola repertoire is comparatively limited, viola players are constantly on the look-out for interesting literature, so the idea of trying to do something similar to Zimmermann was not long in coming.

Stegner's piano accompanist Tomoko Takahashi, who already had some experience in lieder accompaniment and a fondness for the genre, was equally enthusiastic. The viola is often compared with the human voice, and in terms of range and timbre does indeed come rather close to it; so arranging lieder for the viola must have seemed obvious at first. But after examining the material more closely, the musicians began to ask themselves more and more questions. Should the words be recited between the songs? What should be done with songs with several verses? And how far could the originals be transposed without making the piano part sound odd? Eventually they became so plagued by doubts that the project was shelved for several years and only revived when the two musicians came across Robert Schumann's Dichterliebe. Having originally rejected this song cycle on the grounds that it was too well known, they now decided they liked it so much that they would use it after all – and suddenly a whole range of new possibilities emerged. Kaja Engel

MARTIN STEGNER His first teacher was his father, who gave him his first violin lessons when Martin Stegner was eight. After studying with Roman Nodel at the Mannheim Musikhochschule, he switched to the viola and then went for training to Neithard Resa and Wilfried Strehle in the Berliner Philharmoniker’s Orchestra Academy. His first engagement was in 1993, as principal viola of Berlin’s Deutsches Symphonie-Orchester. Three years later he moved to the Berliner Philharmoniker.
Martin Stegner performs as a soloist and chamber musician in Europe, America and Japan. He also works with the Gustav Mahler Jugendorchester and the Orquesta Juvenil Centroamericana and has given courses at Yale University and the Academy of Music Hanns Eisler in Berlin.
He is actively involved in expanding the viola’s repertoire. Together with the pianist Tomoko Takahashi, he has released several highly acclaimed CDs of transcriptions of lieder by Robert Schumann. His work has been documented on 18 CDs.

TOMOKO TAKAHASHI was born in Japan and took earliest lessons on the piano as a four-year- old in her homeland. In 1982 she continued her musical education at the University of the Arts in Tokyo. Starting in 1988, as a scholarship holder of the German Academic Exchange Service, she studied with Klaus Hellwig at the Berlin University of the Arts and earned a solo piano performance degree (Konzertexamen) with highest honors in 1995. Tomoko Takahashi twice won the Artur Schnabel Competition in Berlin as well as other awards.

Her CD with instrumental versions of Robert Schumann’s song cycles (viola and piano) was widely acclaimed by press and major German broadcasters.