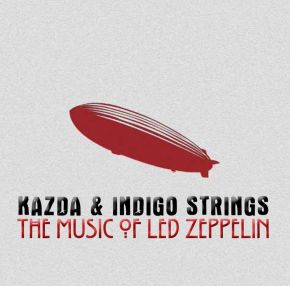 The Music of Led Zeppelin

A string quartet and a six-stringed bass guitar performing the music of one of the most legendary rock bands of the 1970s. Yet there is no singer with the charisma of Robert Plant, no guitar god like Jimmy Page, and above all, no powerful drummer like John Bonham holding everything together. So can it really work? The music of Led Zeppelin represents much more than that for me. Every song evokes memories –memories of buying my first LPs, of my first fumbling efforts with an electric guitar, of my own early basement bands, and of concerts, friendships, encounters. Memories of a time when the music of bands like Led Zeppelin helped lay the foundations for my own musical genesis. Two years ago the idea was born of putting together a program using only a string quartet and bass guitar. I had thought about many different ways of doing this. I didn’t want something with just my own compositions, and I was very used to arranging music, sometimes without much respect for the original. I preferred to pursue my own ideas rather than sticking closely to the original form. The clarity and simplicity of the riffs in the Led Zeppelin numbers we play on this CD are ideally suited to musical development. After all, these songs have already stood the test of time. Jazz musicians like to return time and again to the Great American Songbook, using its timeless compositions as blueprints for their own music. Classical music contains numerous examples of variations on already existing compositions – music in which the composer or arranger takes a theme or motif and reworks it in his or her own musical idiom. I’ve always found it exciting to combine things that appear to be opposites. More than twenty years ago we did a CD recording where we put a punk singer and a legendary jazz pianist together. Together with the band Das Pferd we got a rapper from the Bronx to play with a star trumpeter, and we used a free jazz saxophone to dissect some of the most primordial funk grooves. In the latest Kazda band a freespirited pianist-cum-singer improvised over carefully arranged string quartet movements. I’ve always found it more exciting to take a risk than to stay on well-trodden paths. The Indigo String Quartet founded two decades ago has often supported me in such endeavors, as indeed they did on the most recent Kazda CD “Songs from the Neighbourhood.” The four musicians have not only mastered the classical string quartet repertoire but are also capable of navigating the choppier waters of rock music. I believe we have evolved a common language. This project was not simply about playing Led Zeppelin songs or using them as a basis to improvise as a jazz standard would do. What we did was convey what we considered to be the essence of these icons of rock music, the energy, the tension, the complexity but also their almost folk-like melancholy using the medium of string quartet and bass guitar. The songs serve as a starting point for our own music, for a music into which everything flows that contributed to the artists’ own musical “socialization.”