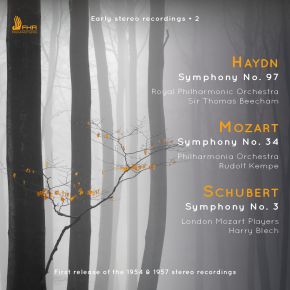 This is the second of at least three volumes of EMI early stereophonc recordings, released in a joint venture with the Archive of Recorded Sound (ARS). EMI started to record in stereo in 1954 and all the recordings in this new series are from this historic period of recorded music. All the releases will appear for the first time in some form and feature many of the greatest classical artists of the time.

Early stereo recordings, Vol. 2 brings together the music-making of three conductors central to London musical life during the 1950s in completely representative repertoire, as well as one of the major singers of the period. All their performances are presented in stereo recordings that testify to the burgeoning engineering brilliance of EMI during this period.

Key features of this release are the first ever release in stereo of Beecham's Haydn Symphony No. 97, and the earliest surviving EMI experimental stereo recording in two movements from Schubert's Winterreise with Hans Hotter and Gerald Moore at No. 1A Studio, Abbey Road, on 25 May 1954, published here for the  first time – hearing them is  an unforgettable experience.