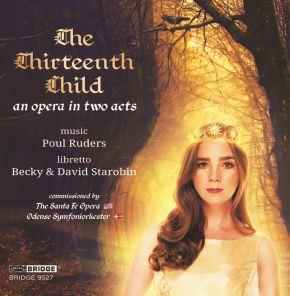 The Thirteenth Child is a new opera in two acts, with music by Poul Ruders to a libretto by Becky & David Starobin. Commissioned by The Santa Fe Opera and the Odense Symfoniorkester, the libretto is an adaptation of the Brothers Grimm story, "The Twelve Brothers".  The recording, made in Denmark and the USA, brings Ruders's gripping 80-minute score vividly to life, and is being released by Bridge Records in tandem with the world premiere staging of The Thirteenth Child by the Santa Fe Opera in July and August of 2019.  The recording features  soprano Sarah Shafer as Princess Lyra; mezzo-soprano Tamara Mumford as Queen Gertrude (Ms. Mumford will also create the role for The Santa Fe Opera production); bass-baritone Ashraf Sewailam as Drokan; bass Matt Boehler as King Hjarne; tenor David Portillo as Benjamin; tenor Alasdair Kent as Prince Frederic and Toke, and bass Alex Rosen as Corbin.  The Odense Symfoniorkester and the Bridge Academy Singers are conducted by David Starobin and Benjamin Shwartz, with Amber Evans, chorus master.  The Thirteenth Child is Poul Ruders's fifth opera.  The 70 year old Danish composer is well known for his gripping dystopian opera, The Handmaid's Tale. The Thirteenth Child shares some of the dark world of The Handmaid's Tale, but also gives the listener a fairytale, full of romance, magic and transformation.