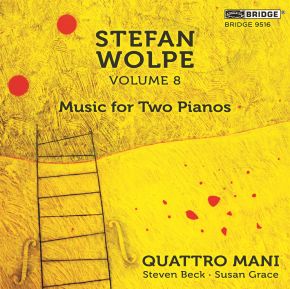 Stefan Wolpe’s escape from Nazi Germany was fraught with uncertainty and danger. During the months following Hitler’s rise to power Wolpe went into hiding, while completing one of his most compelling works- the March and Variations (1932-33), a work of Beethovenian power, scored for two pianos. The piece was largely forgotten until Quattro Mani’s revival of it, and their sensational premiere recording on Bridge's Music of Stefan Wolpe, Vol. 8 (BRIDGE 9516). Wolpe’s ballet score, The Man from Midian (1942) a work based on the Old Testament, is centered around the story of Moses, and is the other major work on this disc.

The virtuoso piano duo team, Quattro Mani (Susan Grace & Steven Beck), has worked with many of today’s leading composers, and is devoted to the expansion of the repertoire for duo piano. QM’s new Wolpe disc is the duo’s 14th disc for Bridge Records.

This impressive eighth volume in Bridge’s Wolpe edition brings his 1933 March and Variations and 1936 Two Studies on Basic Rows. In between comes his ballet about Moses, The Man from Midian, premiered in 1942. The style here, as in the first item, is a muscular neoclassicism with agitprop leanings, but the Studies epitomise Wolpe’s wonderful reimagining of Schoenberg’s 12-tone technique: a bracing, masterly diptych.  — Paul Driver (Sunday Times)