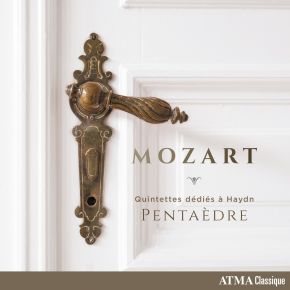 Mozart’s six quartets dedicated to Haydn are featured in new arrangements by Geoffrey Emerson for the Canadian wind ensemble Pentaèdre. Presented as a deluxe boxed set of three discs, this special release completes a project that began 40 years ago.
“The dearth of real wind quintets by Mozart — owing to the fact that this grouping of instruments did not really become popular until after his death — prompted us to complete the work begun by the tireless Geoffrey Emerson in arranging the series of six quartets for wind quintet,” writes bassoonist Mathieu Lussier.
A unique ensemble on the Canadian musical landscape, Pentaèdre explores a diversified and original chamber music repertoire, developed in the tradition of music for winds. Founded in 1985, the five musicians forming the quintet are recognized for the talent, technique, precision and color they bring to their performances.