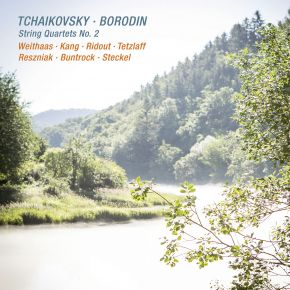 BORODIN: „Many Russian instrumental works of the 19th century were based on a programme, and the same holds true of Alexander Borodin’s Second String Quartet. Here the underlying subject was the great love he felt for his wife Ekaterina. In 1877, the composer (who was also a doctor and a chemist) travelled to Heidelberg, where he had met her 16 years earlier. In letters he described to her how he was returning to the spots they had visited together, and added: “I would give anything to have you here at my side.” Borodin finished writing the D Major Quartet on a date that was likewise symbolic: on 10 August 1881, their twentieth anniversary. ……“ (from the liner notes by Mathias Corvin)

Tchaikovsky managed to make ends meet by teaching, until his concert overture The Tempest (1873) drew widespread attention to his talent as a composer. In high spirits after that resounding success, Tchaikovsky euphorically wrote his Second String Quartet in the course of one night in January 1874. This work is even more elaborate and mature than the more well-known First String Quartet, with which he had attempted to supplement his meager professor’s salary in 1871. He certainly had less trouble composing the Second Quartet: “I regard it as my best work; no other piece has poured forth from me so simply and easily. I wrote it almost in one sitting.”

Musical connections with Mozart’s string quartets are already evident in the first movement.“…. (from the line notes Pedro Obiera)