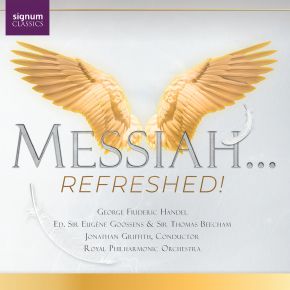 The Goossens Messiah, recorded for the first and only time by the Royal Philharmonic Orchestra and Chorus under Sir Thomas Beecham, has stood as a landmark of the classical catalogue for sixty years. Goossens’ richly orchestrated version is set to reach a new audience thanks to Maestro Griffith and DCINY, New York City’s leading promoter of classical music. They gathered at Abbey Road Studios in London in July 2019, to record the work with the Royal Philharmonic Orchestra and a chorus comprising of sixty members of The JonathanGriffith Singers, drawn from around the world and sixty members of the National Youth Choir of Great Britain. The new recording has captured the score’s vibrant tone colours in thrilling high-definition sound.