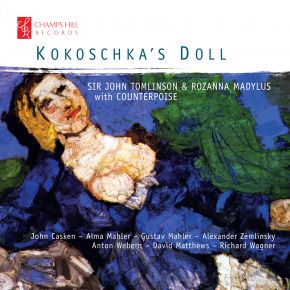 The inspiration for Kokoschka’s Doll derived from the exhibition Silent Partners, featuring the role of mannequins in art, at the Fitzwilliam Museum, Cambridge, in 2014. There, Sir John Tomlinson and Rozanna Madylus saw photographs of the life-size doll Oskar Kokoschka commissioned to help him to come to terms with the absence of Alma Mahler after their tempestuous relationship had come to an end. They felt that a work exploring the way women have been objectified sexually throughout history – as models and muses, as objects rather than as real women – might prove a fruitful addition to the repertoire we had been building for Counterpoise since its inception in 2008.