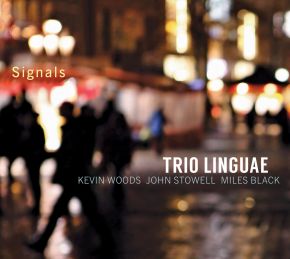 Freewheeling, playful and engaging, trumpeter Kevin Woods, guitarist John Stowell and pianist Miles Black weave their way through a collection of originals by Woods & Black, and others from Jobim, Wayne Shorter, Bill Evans and Harold Arlen on their debut recording. Though colleagues for many years in different configurations, the three found inspiration in collaborating as Trio Linguae (Lin-gwee) through their collective sense of conversational, contrapuntal improvising and reflexive listening - harkening the spirit of duo and trio albums by Bill Evans, Jim Hall or Kenny Wheeler. Integral to Vancouver's creative music scene, Miles Black has been a collaborator of the highest order since the '80s. John Stowell's unique musical voice and relationship to the guitar has gained him untold followers throughout the world since he began touring in the '70s, and Kevin Woods has found his place in Northwest jazz circles as an articulate improvisor and catalyst for artistic endeavors.