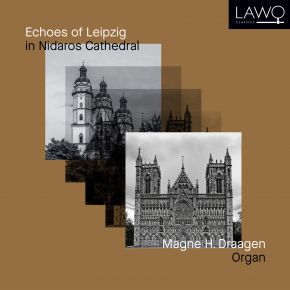 Echoes of Leipzig in Nidaros Cathedral

THE NORWEGIAN LEGACY OF REGER AND STRAUBE
When the young Edvard Grieg travelled to Leipzig to study, Norway was still a nation with modest traditions of teaching and education within the realm of classical music. He was not the first Norwegian musician to head off to this power centre of European art music, and others later followed in his footsteps.

Norwegian organists also made the pilgrimage to the city where Bach and Mendelssohn had been active. Organ composer Max Reger collaborated closely with organist and educator Karl Straube, and both taught in Leipzig at the turn of the century 1800/1900, exerting enormous influence on several generations of organists and composers from Norway, with its developing organ heritage.

Nidaros Cathedral’s large German cathedral organ from 1930 represents the culmination and completion of the late Romantic German organ tradition of which Reger and Straube were prominent exponents.

On this album, Nidaros Cathedral organist Magne H. Draagen presents a collection of organ works of Norwegian organists who either studied in Leipzig themselves for longer or shorter periods of time in the early 1900s, or were pupils of one of them who had studied there.

A characteristic feature of the works is that the classical forms from the German Romantic school are combined with elements from Norwegian traditional folk music, and through this they are distinguished to a greater or lesser extent by a national tonal language.

Organist Magne H. Draagen (b. 1974) holds a Bachelor’s degree in Church Music and soloist diploma from the Norwegian Academy of Music. As organist he performs regularly at home and abroad, with a repertoire ranging from the Baroque to the present day. He has contributed to numerous recordings as composer, arranger, conductor, accompanist and soloist. Since the autumn of 2012 he has served as Director of Music of Nidaros Cathedral.