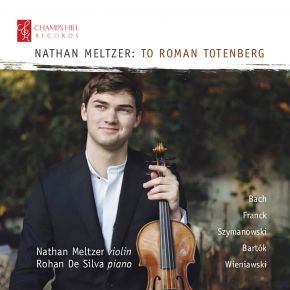 The Ames Totenberg violin was famously stolen from Professor Totenberg in 1980 and recovered by the FBI some 35 years later from a California basement.Totenberg’s daughters arranged for the instrument to be restored and sold to an anonymous buyer. Nathan Meltzer became its proud custodian in October 2018, beginning a new chapter in its history.

For his debut album, made together with pianist Rohan De Silva, Meltzer has recorded a selection of Professor Totenberg's favourite pieces, including the Wieniawski Polonaise and Szymanowski Arethusa, which Totenberg performed for President Roosevelts at a White House recital in 1936.

“For my first album, I wanted to give an admiring nod to the great teacher and virtuoso violinist Roman Totenberg, whose memory I hope to honour as the current guardian of his beloved violin. It has been amazing to play the Ames,Totenberg Stradivarius, and not just because a lot of people want to hear it again. After all those years locked in the basement, the instrument is opening up and finding its voice – in a way, evolving.

Likewise, with this recording, I wanted to illustrate the generational evolution of music and the people who perform it, striking a balance between my own sensibilities and the heritage of this wonderful instrument. The mix of composers includes Szymanowski and Wieniawski, who Roman Totenberg championed and performed frequently; Bartók, who he played brilliantly and I hold close to my heart; and Bach and Franck, whose sonatas are staples of the repertory and move me deeply.”