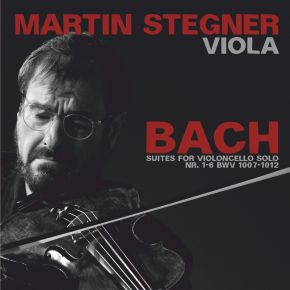 His first teacher was his father, who gave him his first violin lessons when Martin Stegner was eight. After studying with Roman Nodel at the Mannheim Musikhochschule, he switched to the viola and then went for training to Neithard Resa and Wilfried Strehle in the Berliner Philharmoniker’s Orchestra Academy. His first engagement was in 1993, as principal viola of Berlin's Deutsches Symphonie-Orchester. Three years later he moved to the Berliner Philharmoniker. Martin Stegner performs as a soloist and chamber musician in Europe, America and Japan. He also works with the Gustav Mahler Jugendorchester and the Orquesta Juvenil Centroamericana and has given courses at Yale University and the Academy of Music Hanns Eisler in Berlin. He is actively involved in expanding the viola’s repertoire. Together with the pianist Tomoko Takahashi, he has released several highly acclaimed CDs of transcriptions of lieder by Robert Schumann. He has been a keen jazz musician since his youth, and has appeared at numerous festivals, performing with artists such as Herbie Mann, Diane Reeves, Thomas Quasthoff and Nils Landgren. A co-founder of the Berlin Philharmonic Jazz Group, he founded the ensemble Bolero Berlin in 2008 in which he and soloists of the Berliner Philharmoniker dedicate themselves to South American music. In 2015, an album was released together with the German/Persian singer Cymin Samawatie on the ECM label. Martin Stegner is involved in other projects with, among others, Simon Stockhausen and the Chinese sheng virtuoso WuWei. His work has been documented on 18 CDs.