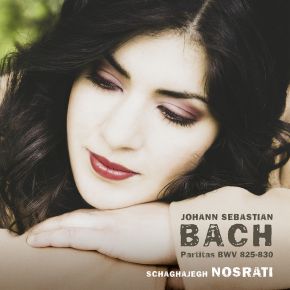 „There are countless reasons for loving Bach’s music“

Schaghajegh Nosrati on her relationship to Johann Sebastian Bach

There are countless reasons for loving Bach’s music. Certain musicians and music-lovers are fascinated by its complexity, its flawless craftmanship. Others treasure it for its emotional, spiritual significance with total absence of sentimentality. Others, still, are seduced by Bach’s appealing mixture of transparency and warmth.

I also love Bach for all the above reasons, and many more. For me there is no question that he is the greatest composer of all time. It is all the more surprising and heart-warming to note the modesty he displayed in rare testimonials referring to his own work and vocation as a composer.

When I learn that a composer of Bach’s stature published his impressive collection of partitas under the modest title Clavierübung (“Exercise for Keyboard”), and when I read his statement that music’s only purpose should be “the glory of God and the recreation of the human spirit”, I see that he was manifestly excluding his own person – a gesture that stands in stark contrast with my own generation’s chronic hubris and boundless egocentricity…..

The order of the partitas on this recording does not follow the printed version – for several reasons. For one, from a purely technical point of view, a chronological order would be difficult to put into practice. Partitas Nos. 4 and 6 last half an hour each and would fit on one CD, but combined with No. 5 they would surpass the total length of 80 minutes per CD.

Apart from this, however, I do not find it obligatory to listen to the partitas in the order in which they were printed, since the composer himself certainly did not have a live performance of the entire collection in mind, but viewed each one as a self-contained work. I have thus chosen to introduce each CD with an overture-like movement (CD 1 sets in with the Ouverture of the 4th Partita, and CD 2 begins with the Sinfonia of the 2nd), while, at the same time, proposing a succession of suites in major and minor modes.

I also found it appropriate to place the two longest and most diametrically opposed works, Partitas 4 and 6, at the beginning and at the end of the recorded collection, thereby achieving a certain degree of symmetry..

The chosen order and the regular alternation between major and minor (as opposed to the chronological order, which would have C Minor followed by A Minor, and D Major followed by G Major) serve to highlight the variety among these works. (excerpt from the Booklet texte by Schaghajegh Nosrati) www.nosrati-pianist.com