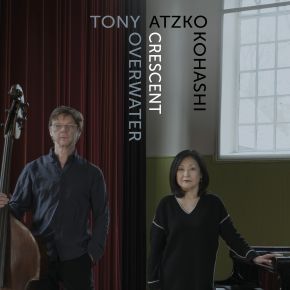 Atzko & Tony’s latest album, "Crescent" was recorded on February 14, 2021 at Beauforthuis, a music venue and a former church, in Austerlitz in the Netherlands. In the midst of a prolonged pandemic, it was an exceptional recording where two musicians entrusted their passion to their instruments. Atzko & Tony immediately bonded through a deep desire to realize the recording and put their best into the project. The duo was deeply inspired by Coltrane’s Crescent.

The beautiful acoustic of the church building, combined with the beauty of the surrounding snowfields, resulted in an impressive recording. Only five months after the recording, the album "Crescent" was released by Studio Songs in Japan, and it is scheduled to be released worldwide in January 2022 by Jazz in Motion records.

It is said that people have long considered the gradually waxing moon to be a symbol of the fulfilment of their wishes, and that praying to the crescent moon was a special occasion. The crescent moon, which reflects the sunlight and waxes day by day, is like a piece waiting to be fully formed. You do not just entrust your dreams but you set your sights and your hopes, looking forward to the future and preparing to take action. It is no wonder that Coltrane's Crescent connected with their hope to realize this recording session.