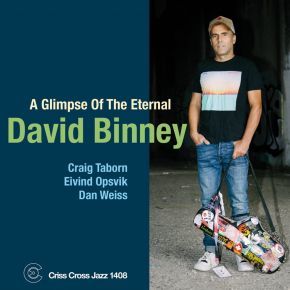 A Glimpse Of The Eternal

Between 2004 (Bastion of Sanity) and 2016 (The Time Verses), alto saxophonist David Binney made nine albums for Criss Cross as either leader or co-leader, presenting predominantly his distinctive original music. Much of it emanated from his interactions in New York – his home from 1981 until 2018, when he moved to Los Angeles – with a cohort of local musicians comprising a who’s who of contemporary improvisers. During that intense and productive 12-year span, Binney recalls, he often spoke with Gerry Teekens – who founded Criss Cross in 1981 and sustained the label until he died in October 2019, leaving a legacy of over 400 albums, all of them good, some of them classics of the jazz idiom – about making a ballads record. Teekens´ son promised his father to keep the legacy alive and the label going, and after an 18-month recording hiatus he approached some of his´ father’s favorite artists to revive Criss Cross and launch it into the 2020s. One was Binney, who took the opportunity to suggest, “Maybe I should finally do that ballads record in honor of your father.”

The tenth Criss Cross album with Binney’s imprimatur, A Glimpse of the Eternal, is, he says, “completely different than anything I’ve ever done – chilled out, an honest and pleasant vibe, nothing too complicated or intense.” If that self-description seems at odds with the intense, complex tonal personality that Binney has presented on his 30-album discography since 1990...well, that was his intention. He explains: “Initially, I wanted to do something like those almost commercial records from the ’50s or ’60s or ’70s, like a Gene Ammons record I have where he plays these balladlike tunes for 2½-3 minutes.” He adds: “All the guys were superenthusiastic about doing a straight-ahead ballads record.”