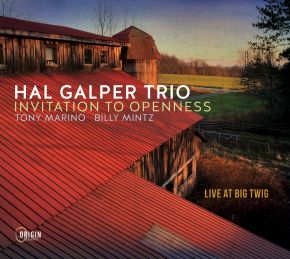 Disbanding his hard-touring trio in 2000 after a productive decade, pianist Hal Galper returned to “the shed” to work on concepts that would lead to an indomitable period of innovation from 2006 to 2020, remarkably occurring a half century into his career. Enabled by his association with bassist Tony Marino and drummer Billy Mintz, Galper pursued a rubato approach to time and movement, documented first on Agents of Change in 2006, and then through his ground-breaking recordings & tours from 2007-2020 with bassist Jeff Johnson and drummer John Bishop. This 2008 album with the Agents of Change trio from early in the rubato period was recorded live for WJFF Radio in Sullivan County, NY, and reflects a time and place in Galper’s career where he was becoming supremely certain with his musical voice and comfortable with his gradual shift to being a member of the rich cultural community in the Catskills. After decades on the road and in New York City, Galper is happily ensconced in the hills, and 14 years since this recording he’s again performing weekly with Marino & Mintz up near his home.