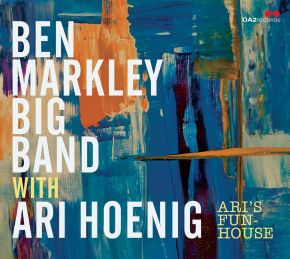 Whether through his recordings with players like Terell Stafford, Greg Osby or Joel Frahm, or his big band recording honoring the music of Cedar Walton, pianist/composer/arranger Ben Markley always provides a platform where his guests can shine. Long appreciating the idiosyncratic rhythmic mastery of drummer Ari Hoenig, along with the equally personal melodic sense of his compositions, Markley was inspired to take on the daunting task of arranging a set of Hoenig's music for big band. With roots in the traditional big band world, the music dives deeply into other modes of modern expression, which the Denver-based ensemble brought their A-game for. A session that demanded a high level musicianship and abundant sense of creative adventure, the results provide an aural ride that can best be described as Ari’s Funhouse.