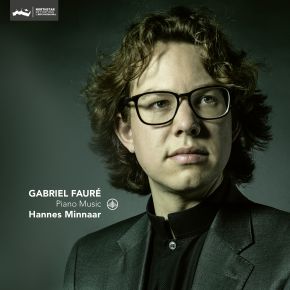 Night music, water music Thirteen Nocturnes and as many Barcarolles form the core of the collected output of Gabriel Urbain Fauré (1845-1924) for the piano. Night-time meditations, then, along with inspiration drawn from rippling water (the origins of the barcarolle lie in the songs sung by Venetian gondoliers and the word itself comes from the Italian ‘barca’, a boat). Along with some Impromptus, Préludes and other works, one might rapidly gain the impression of a delightful collection of salon music, whose titles may actually display the influence of Chopin (Fauré was even to write a Mazurka). But this music is so very much more than pretty salon music. In the intimacy of these genres, Fauré succeeded time and again in nothing short of exposing his very soul. And the French composer’s style is entirely his own – original and personal – from the first note to the last.

Fauré’s career started off like that of an outsider. At the age of just nine, he moved from Pamiers (in the shadows of the Pyrenees in the south of France) to Paris to attend lessons at the École Niedermeyer there – an education based on church music that his parents felt more appropriate than the official Conservatoire. Among his teachers was Camille Saint-Saëns, who was to prove important to the younger man throughout his life as a mentor and friend. After graduating, Fauré worked as organist and choirmaster at a number of churches in Paris and elsewhere. He also taught and composed – mostly chamber music and songs, genres that were considered to be fairly insignificant in France at the time (in fact only composers of opera were taken seriously). His music was only appreciated in fairly limited circles and the composer suffered regularly from bouts of depression. He also taught at the Conservatoire from 1892, where his students included Maurice Ravel and George Enescu. He was appointed Director of the Conservatoire in 1905; this improved his reputation significantly but left him little time for composition. It was around this time that problems started to emerge with his hearing. As well as experiencing increasing difficulty in hearing high and low frequencies, sounds and intervals also became distorted for him. He resigned in 1920, due his deteriorating health, and died some four years later.