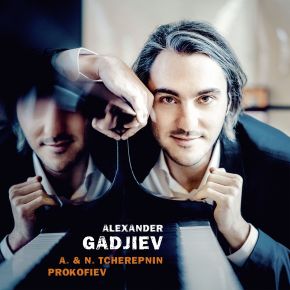 Exciting Journey
in the booklet interview the italian/slovenic pianist speaks about his program:

CdR: Now let’s talk about your CD. What is the idea behind it?

AG: This is a special CD that exclusively features brief pieces taken from short anthologies or collections. For me it’s like a journey without a chronology: I just wanted to choose an interesting itinerary. We start with a jolt: a brutal gesture in Prokofiev, almost entirely lacking a melody. From that point on, the moods in the pieces blend into one another.

CdR: What made you thinking that The Bark of Yearning would be a good CD’s title?

AG: I found it in a poem by Konstantin Balmont. One evening in Saint Petersburg in 1917, Balmont heard music by Prokofiev, who was also present, and he wrote a poem on the spot. Prokofiev was so taken with Balmont’s poem that he spontaneously chose the quote Visions fugitives as the title for his collection of miniatures. After I discovered that poem, I read more by the same author to get a feeling for the atmosphere, and The Bark of Yearning was my favorite. All these pieces seem to evoke a “dark meditation”. Even in lively passages there is an underlying mood of brooding: it is the atmosphere of the early 20th century and the cultural milieu of Symbolism. These are brief, abstract visions of different worlds. You can sense that a single chord or series of sounds could escalate to evoke an entire universe. Or take the Sarcasms, with which I begin the CD: they stand for an experimental avant-garde, a quasi-scientific investigation, probably connected with the mood in Saint Petersburg immediately prior to the October Revolution in 1917. The passages are brutal, thus sarcastic. Two different worlds always coexist in Prokofiev: one is full of fantasy, imagination, and wonder; the other is eerie and grotesque. In the end we left the title off as the program says it all.

CdR: What brought you to the following works by father and son Tcherepnin featured on this CD?

AG: On the Internet, I came across these pieces by chance. Nikolai Tcherepnin, the father, was a widely respected composer, mainly known as a conductor. He was also Prokofiev’s conservatory professor in orchestral conducting (and in his diary Prokofiev wrote that he had learned more about the orchestra from Tcherepnin than from Rimsky-Korsakov, who was his actual orchestration professor and a legend in his own time). And as far as the works of Nikolai Tcherepnin were concerned, Prokofiev was full of praise (a rare event). From the works of Nikolai Tcherepnin, I have chosen the musical tale The Fisherman and the Fish, a series of brief pieces in a fairytale-like atmosphere. The fish, who has been caught, can give the fisherman anything he desires. But the fisherman’s evil wife is never satisfied and always wants more. Full of patience and compassion, the fish goes on giving. But when the wife wants to become the queen of the sea, the fish says “No!” I have chosen to close the CD with this cycle: my listeners are thus left in a tranquil atmosphere brimming with colorful sonorities.