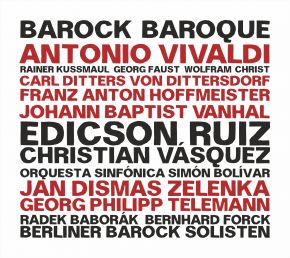 The Berliner baroque soloists under the direction of Rainer Kussmaul are one of the most renowned specialists of the early music. Their recordings have been awarded several times with the Echo classic award. This CD includes masterpieces of Antonio Vivaldi: the famous four seasons with Rainer Kussmaul on the solo violin, the cello concert in b-minor RV 424 with Georg Faust, the Viola d’amore concert a-minor RV 397 with Wolfram Christ and the concert für oboe & violin in B-Dur RV 548 with Jonathan Kelly as soloists.

Aged only fifteen, Edicson Ruiz was awarded first prize at the International Society of Bassists' competition in Indianapolis, making him the youngest winner of all time. Just two years later he was made a member of the Berlin Philharmonic's double bass section, becoming not only the first Latin American musician to be so honoured but also the youngest ever in the history of the orchestra.

Conductor Christian Vásquez is a protégé of the internationally known Venezuelan 'Sistema' and has already established himself as one of the most promising developing talents from the Americas. His debut as a conductor with the Simón Bolívar Youth Orchestra of Venezuela took place in April 2008   in Caracas conducting Mahler's Symphony no.2.

The music sounds like a sonic allegory on transience and futility, just like the elapsing of time or the dwindling vitality. The 'festive baroque' demonstrates a delicate sensorium for the downsides of earthly pleasures. Vanitas vanitatum! Vanity of vanities; all is vanity!  Jan Dismas Zelenka