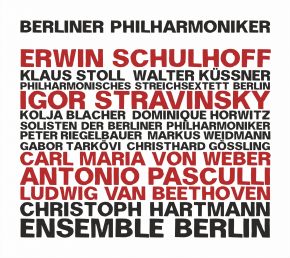 PHIL. 06004 | ANDRAS ADORJAN / YUMIKO URABE / KLAUS STOLL / WALTER KÜSSNER / PHILHARMONISCHES STREICHSEXTETT BERLIN | ERWIN SCHULHOFF
Erwin Schulhoff was undoubtedly one of the most versatile and imaginative composers of the last century. That his career – and his life – came to an abrupt end in a National Socialist internment camp in 1942 represents one of the great tragedies of Europe‘s barbaric recent past. Nevertheless, during his brief life, Schulhoff (1894 - 1942) brilliantly absorbed, transformed, and expressed many of the most significant and progressive creative urges of his age. His catalogue of over 200 compositions includes some of the most fascinating, challenging, exciting, and moving music of the twentieth century. The three works on this disc were all written by Schulhoff in the 1920s, when his career was at its peak, and display the full range of the composer‘s colorful, expressive musical palette. Misha Aster

PHIL 06005 | KOLJA BLACHER / DOMINIQUE HORWITZ / SOLISTEN DER BERLINER PHILHARMONIKER |
IGOR STRAVINSKY 'DIE GESCHICHTE VOM SOLDATEN' - 'HISTOIRE DU SOLDAT
When Igor Strawinsky read 'The Soldier's Tale' in 1916 he was inspired to transform the fairy tale into a landmark of modern musical theater, together with the librettist Charles Ferdinand Ramuz. At the time Stravinsky was living in exile on Lake Geneva.
The effects of war could also be felt in Switzerland, and all the theaters were closed. The piece was therefore created with purely practical considerations in mind – a mobile stage, a minimal seven-piece orchestra, and a plot in which the scenes followed each other like a series of illustrations. The story is taken from a Russian folk tale, but there are parallels in other cultures, such as the puppet show version of Doctor Faustus. A soldier on the way back to his home village enters into a pact with the devil. He sells his violin for a book of magic, which will enable him to become rich. Although this comes to pass, the soldier’s wealth does not make him happy, because someone who has sold himself to the devil is not capable of love or devotion to another. The music is not set to the text, but instead emphasizes particular situations such as the soldier's time on the road or his encounter with the devil. The dominant elements are sometimes rhythmic and dance-like – making use of marches, tango, waltz, and ragtime – and sometimes folksy. This version has been developed and narrated by Dominique Horwitz from the G e r m a n a d a p t a t i o n b y H a n s R e i n h a r t .

PHIL 06012 | CHRISTOPH HARTMANN / PHILIPP BOHNEN / ANDREAS BUSCHATZ / ENSEMBLE BERLIN / MITGLIEDER DER
BERLINER PHILHARMONIE | CARL MARIA VON WEBER / ANTONIO PASCULLI / LUDWIG VAN BEETHOVEN
The ENSEMBLE BERLIN was founded in 2000 by an ensemble of musicians from the Berlin Philharmonic who had got together the previous year to play at the Landsberger Sommermusiken music festival. Since then they have played at the
festival, held in Landsberg am Lech in southern Bavaria, every July.

The ENSEMBLE BERLIN septet actually consists of eight people, for it includes the arranger Wolfgang Renz, who arranged Maurice Ravel’s 'Le Tombeau de Couperin' and Modest Mussorgskij’s 'Pictures at an Exhibition' for the first Berlin Philharmonic recording. On the present album 'Virtuoso' he has set about arranging music by Carl Maria von Weber. The Septet in E Minor for oboe, bassoon, two violins, viola, cello, and double bass is based on Weber’s late fourth piano sonata, op. 70, composed in 1822. Its underlying mood is lyrical and melancholic. Both the first and second subjects of the first movement are lyrical, and this prevailing mood is disturbed only during the development where the apparently melancholic idyll of what has gone before is suddenly called into question. The extroverted Scherzo that forms the second movement thus comes as something of a surprise.

In terms of dramatic effect this arrangement makes sense, with the second movement forming a contrast to the subdued atmosphere of the first. Despite the brilliant clarity of the Scherzo Weber calls for a 'murmurando' in the restless middle section, which produces a strangely diffuse effect. The slow movement is quintessential Weber: a simple movement with folk song-like melodies that is scored much more sparsely than either of the preceding two movements. The final Prestissimo is an inspired, spirited dance that makes us forget the elegiac, melancholy mood with which the piece began.