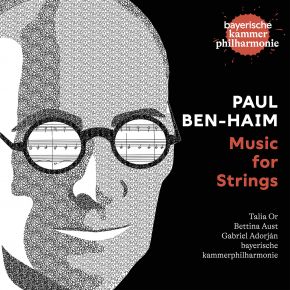 Music for the “most noble among all instruments”:

All the works on this album are from the period ranging from 1945 to 1956. It was a good decade for Paul Ben-Haim, but it still represents only a fraction of the artistic career of a composer who left over 250 works to posterity.

These years were nevertheless particularly significant for him. The end of the Second World War in 1945 and the founding of the State of Israel in 1948 were part of a period filled with hope, awakening and renewal; at the same time, the shadow of the previous catastrophic events in Europe still lingered, along with painful memories of persecution, expulsion, and exile.

Born in Munich in 1897 as Paul Frankenburger, the Jewish composer already fled the menace of Nazi persecution in 1933 and settled in Palestine, changing his surname to Ben-Haim (“Son of Henry”). His exceptional musical abilities and his rapid adaptability soon permitted him to lead a new existence as composer, conductor, and conservatory professor.

And because he endeavored to find a musical language that would do justice to his artistic need for expression and to the circumstances of his new home, Ben-Haim soon found a personal style that would mark an entire generation of younger musicians in Israel……….. (Excerpts from the booklet notes by Tobias Reinhard)