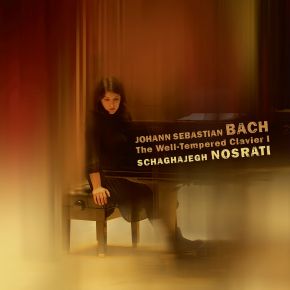 The Well-Tempered Clavier I

Reflections on the Well-Tempered Clavier

Hailed by Hans von Bülow as the “Old Testament” of music history, the Well-Tempered Clavier has been the object of a substantial amount of publications and research over the past three centuries. A detailed analysis would surpass the limits of a CD booklet and could not do justice to the work’s complexity: readers will thus excuse me for limiting myself to a few personal remarks.

The Well-Tempered Clavier from a current perspective

We are now in the year 2022: as chance would have it, this CD’s release coincides with the 300th anniversary of the first volume of the Well-Tempered Clavier. Our lifestyle has changed in many ways over the past three centuries. We travel at much greater speed; we develop an increasing number of technologies and digital means of communication. Trained specialists are responsible for every area of our lives. But have we truly made progress?

Excessive global travel, as we know, has an alarming impact on climate. While many areas of our life become digital, communication is made simpler but ultimately only leads to mental lethargy, social isolation, and emotional impoverishment.

Specialists turn out to be one-track minds who accumulate isolated bits of knowledge – indeed, as ancient Greek philosopher Heraclitus remarked, “knowing many things doesn’t teach insight.” Insight thus not only requires for us to have knowledge, but also for us to broaden our horizons. And that is exactly what is so fascinating about the Well-Tempered Clavier.

It is one of those works that are not only capable of transmitting a great deal of knowledge, but also of revealing profound insight into the essence of music and mankind. Hardly any other composer ever combined so many heterogeneous elements and related them to one another.  Bach’s view of the world was all-encompassing: thus, with the Well-Tempered Clavier, we not only embark on a journey through all 24 keys, but also spanning every facet of human existence….. ……... (from the booklet notes by Schaghajegh Nosrati)