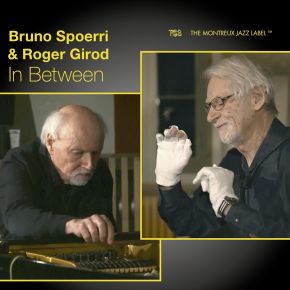 Electronic music is often accused of being soulless, unable to transmit emotions, and of being dominated by technology. However, this problem is far from being novel. Just think of the poor pianists who, since the invention of the piano (itself a highly technical and complex machine), have been faced with the task of breathing something like a musical soul into the monster. Saxophonists don’t know this problem: they sing, they speak, they even scream their emotions directly into, and through their instrument. This is probably one of the reasons why jazz, this highly expressive music, likes to use this instrument – glibly based on the popular definition, “Jazz is when there’s a saxophone”.

Bruno Spoerri and Roger Girod find themselves in the midst of this tension – “in between” – as they explore new possibilities for the interplay between technical challenges and personal expression. It turns out that the two seemingly contradictory approaches to jazz and electronics have more in common than meets the eye: the playful and improvisational, the exploration and development of a personal sound palette, and the use of new rhythmic structures have been part of jazz since its beginnings, and make their appearance quite organically in electronic music.

For 50 years Bruno Spoerri has been dealing with the traditions and developments of jazz as well as with electronic music – from its pioneering analog beginnings to the digital forms of today. In pianist Roger Girod he has found a partner who is able to rectify these two sides with his spontaneous interventions in an intensively interactive intercourse, forming an amalgam that speaks from the language of jazz, but also widens the vocabulary of this perennially metamorphic music. In the middle of this free space – between traditional forms and the potential of today’s digital age – this duo clearly feels at home – In Between!