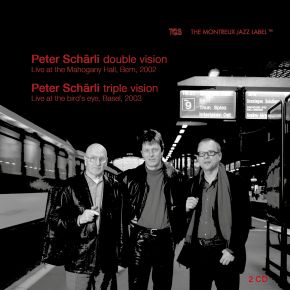 The queen of instruments is not the organ, as is often claimed; it is the trumpet. What a diversity of sounds it can produce! From radiantly bright to shadily muffled, it can whisper, mutter, boldly assert, eloquently recount, laugh and cry... – and just about all of it can be heard on these two CDs. Three wonderful trumpeters from two generations get together to play, supported by a rhythm section that provides everything a soloist on stage needs to take off.

At the beginning of the noughties, Peter Schärli, today’s doyen of Swiss jazz trumpeters and at that time one of the up-and-coming soloists, had the excellent idea of presenting himself together with colleagues and demonstrating the diversity of his instrument to the audience. The two concerts presented here are each the first of a longer series: all is not perfect yet, but one can sense the great potential that lay within these regrettably short-lived bands.

The rhythm section, with Vince Benedetti, Swiss by choice, on the piano, Hämi Hämmerli on the bass, and the sadly deceased Peter Schmidlin on the drums, sets the standard for what is to be played: standards, namely – swinging and contemporary jazz. And the trumpeters are happy to meet this challenge, each in his own way. The three are easy to distinguish. Peter Schärli lets his instrument shine, his sound is radiant, bright, and clear, and as an improviser he relies on it, prefers to play less and more simply, but all the more essentially. His colleague Lars Lindvall, a few years younger, originally from Sweden and living in Switzerland, plays a darker sound, penetrating the chords searchingly, at times introspectively, then again elegantly.

A particularly nice idea of Peter Schärli’s was to include his former teacher Umberto Arlati. “Umbi”, as the whole world called him, embodies the first generation of jazz players after the war; he improvises entirely in the spirit of the 1950s hard-boppers, and his version of “Body and Soul” rendered here is stunning. There are not too many recordings of Umbi, so these ones form an important part of his legacy.

In sum, this is strong music, played by strong musicians – and a great pleasure to listen to. One wishes one could have been there at the time!