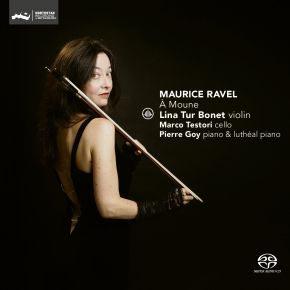 Hélène Jourdan Mourhange met Ravel for the first time after a concert in which she performed his Trio. She was an interesting, intelligent woman, well versed in the arts and culture of her time, and was a talented violinist who, however, had to stop playing years later due to rheumatoid arthritis. She then dedicated herself to musicology, reviews and other artistic activities. Not only that she was, like me, a violin player, but also shared that same disease, which I suffered in my youth. This has made me feel even closer to Ravel, and to feel a desire to make a tribute to Hélène by recording all the pieces written for her and thanks to her.

The close friendship between the two lasted throughout the life of the composer and he often asked her for advice while composing his violin works. In their inexhaustible friendship he affectionately called her "Moune".

Together with Marechal, she premiered “Sonata for violin and cello” (1921) dedicated to Claude Debussy, one of Ravel’s bravest compositions.
He also dedicated his Violin Sonata (1923-27) to her, a work to which he devoted much energy and time, and in which he tried to combine two instruments that he actually considered incompatible. The first poetic movement is very similar to the first movements of the Duo and the Piano Trio, but the rest seems to have been more complicated for him, taking years to finish. Finally, he wrote a blues as a second movement, and a Perpetuum Mobile heavily influenced by the modern music they used to listen to on their long nights together in Paris. He also composed for Hélène the marvelous “Berceuse sur le nome de Gabriel Fauré” (1922), using the letters of his teacher's name turned into notes to build the simple and magical melody that she could still play. Although Ravel asked Hélène to bring him the violin and the 24 Paganini Capriccios as inspiration for the composition of the Tzigane (1924), and was helped by her again, this time the piece was dedicated to the hungarian violinist. He wanted to make a virtuoso piece inspired on Paganini and Liszt, and probably Hélène, due to her illness, was no longer able to perform. He made three versions of the Tzigane, for the virtuoso violin accompanied by the piano, an orchestral version, and also the most unique, accompanied by the Luthéal, a prepared piano with registers of a harpsichord and the cymbal-like sound, with its wonderful gypsy and rhapsodic character.

This tribute arrives for me in a moment in which every work I perform is combined with a deep study of the performance of those times. This is why we chose to record on gut strings (as they did then), bows from that moment and a historical piano, as well as the less known version of the Tzigane with the Lutheal. The blending of gut strings between violin and cello, as well as with the old piano and the Lutheal is unique and helps to understand  many of the aspects of performance in many old recordings.