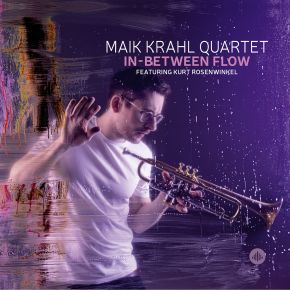 The continuing growth of Maik Krahl as a melodic improviser, bandleader, and composer is distinctly evident in this new release. In-Between Flow, Krahl’s third outing as leader, is a portrait of a young artist who has gone through many years of dedicated hard work, study, experimentation, and refinement in order to achieve this level of instrumental and artistic progress. Krahl belongs to a new generation of improvisers who have acquired a breadth of technical and theoretical facility, while not losing the spontaneity and rawness of this music we call jazz. As a bandleader, he chooses his colleagues wisely and for this date is joined on a few tracks by the visionary guitarist Kurt Rosenwinkel, whose brilliant playing adds a cherry on top of this already delicious line up.

The title In-Between Flow refers to ever evolving progression of our human condition. As in nature, the human spirit can expand and unfold, maturing to a new state where it may settle for a while until some new impulses inspires another transition. These transitions, sometimes subtle, sometimes abrupt; as well as the times of contentedness and serenity are the inspirations for this music.

The record opens up with an ode to the town Krahl calls home. Cologne 4 AM, begins with a haunting melody by Krahl’s soft yet powerful horn before settling into a perfect vehicle to display his command of melodic and motivic story telling. There is something about the time of 4 AM that seems to permeate literature and music, and this track will add to the canon of artistic references to this magical time where the night meets the morning.

Mr. Rosenwinkel joins the band for Slosetta, which is a great example of Krahl’s ability to craft a tune. As is to be expected, Rosenwinkel weaves through the changes with grace and mastery, obviously enjoying the communication with the rhythm section, who are undeniably inspired by his harmonic, rhythmic and melodic ingenuity.

Jakob Kühnemann, a Bandleader and composer is his own right, has been an in demand bassist on the German and European scene for several years, and his contribution to this record is proof of why that is. Although Krahl takes the lead on Drizzle Counter, in a great display of technical virtuosity, it is Kühneman who stands out on this track. It is not only in his improvisation, but more so in his poly rhythmic pulses dancing up from the deep and the harmonic insinuations in his accompaniment of Krahl’s solo that demonstrate his musical mastery.

Rosenwinkel joins again for No Claim Claim, a composition so balanced that I would not be surprised to hear other artists recording or performing it in the future. After Krahl’s melodically inventive statement, Rosenwinkel shifts the band to the next gear building the intensity towards the out head.

Constantin Krahmer has been Krahl´s piano player since his debut record, Decidophobia. His patience, ingenuity, and big ears make him a perfect accomplice to Krahl, and his sensitive yet powerful approach and accompaniment on Reconstruction of a Dream as well as his harmonic and melodic inventiveness on Vinaceous Clouds (where he plays Fender Rhodes) make it clear why he is an integral part of this unit.

Ms Ludgate is a funky composition with angular melody that is another feather in the cap of the band leader. Kurt Rosenwinkel is back, and seems more than willing to engage in some rhythmic dialogue with the spectacular young drummer on the date, Fabian Rösch. Throughout this entire record Rösch is subtly but strongly guiding the band, playing his role as a supportive and interactive proponent to the music. We will surely be hearing much more from this young man with such a refined sound and clear rhythmic conception.

Flawless Sunday, a perfect closing statement for this record. The melody is another great example of Krahl’s growth as a composer. The whole rhythm section really shines on Krahmer’s choruses, where the three colleagues push and dare each other rhythmically as well as harmonically before Krahl enters and brings the record to a close with his beautiful rich tone and melodic playing.

It is a great pleasure to hear the growth of a young artist with such dedication and vision. Hearing how Krahl and his band mates navigate through the vicissitudes of this music is an inspiration that can be mirrored in everyday life. A lesson in accepting the ever changing flow from one state to another. Growing, learning, and evolving into a new state, until the process begins anew. In-Between Flow.