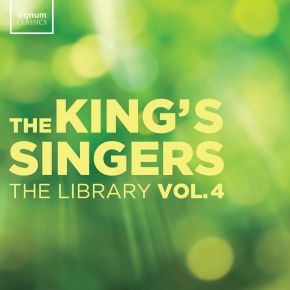 This is the fourth volume in our The Library EP series. The idea behind it is to explore, maintain and grow our library of close-harmony repertoire. “Close-harmony” is arguably the part of our work for which we are best known, and our library of thousands of pop,

jazz and folksong arrangements is one we’re always determined to nurture. The track- listing for each volume in the series is designed to celebrate old favourites alongside brand new arrangements created especially for these recordings, which we hope will become the ‘old favourites’ of the future.
The Library, Vol. 4 was recorded at Snape Maltings in Suffolk (where we also recorded Vol. 2). On our final day of recording we received a message on Twitter from the world-famous mezzo soprano Dame Sarah Connolly, saying that she was teaching at Snape that day, that she’d always loved The King’s Singers. Might she come and hear us recording? Of course she could. In fact, by the time she left, we had put her on the end of the group as a seventh King’s Singer and recorded a run-through of Arthur Sullivan’s The Long Day Closes, a favourite song of hers and ours. The run-through hasn’t been included on this recording, so you may wonder why we mention it. Well, because it is testament to the remarkable cultural energy which emanates from Snape Maltings.

The fact that Sarah could fulfil this childhood dream, and that we had the chance to sing with such a remarkable artist, demonstrates the kind of buzz in the air which seems to generate artistic magic at Snape. That day, we truly felt it. Not a year has gone by during Chris’s decade as a King’s Singer when he hasn’t asked if we can re-record Somewhere over the rainbow. It’s an arrangement he fell in love with when he first heard it on Get Happy, the group’s 1991 studio album made in collaboration with the pianist George Shearing. Finally, this felt like the time to do it. Rather than building up the recording voice by voice as you would for a studio recording, all of the volumes in The Library series are deliberately recorded live – as they would be in concert. This was a key element of how we wanted to capture our version of Somewhere over the rainbow, with its delicate interplay between solo voices, instruments, a cappella voices and full ensemble. The tight, rich harmony of the voice parts makes this a challenging arrangement, but it was a magical session – all the more inspiring for having the two instrumentalists playing with us. With the wonderful George Shearing sadly deceased,we looked slightly closer to home for our musicians this time, and chose Pat’s brother, Liam Dunachie and his friend Misha Mullov-Abbado – both top players and composers in London’s jazz scene, who often play together in Misha’s own band. Arlen’s 1939 song is the perfect start to a track list: simple, iconic, and characterised by the optimistic lyrics and the smiling octave leap at the start of each chorus.

Seaside Rendezvous has been in our library for many decades, and is often used in our concerts as an ‘ender’ to the performance. The song is a self-consciously eccentric and retrospective number by Queen, first released on their 1975 album A Night at the Opera. The song summons up some of the energy of 1930s showbiz romance, and this atmosphere was perfectly judged in Paul Hart’s arrangement for The King’s Singer’s album
Good Vibrations in 1993. The unexpected appearance of kazoos always raises a giggle in concert, as does the second baritone’s insistence on a kiss from the bass at the end. Track 3 is our very first recording of Bob Dylan’s 1997 hit Make You Feel My Love, in this arrangement by our friend and collaborator Alexander L’Estrange. The song has found a new resonance and younger audience after it was covered by Adele on her debut album 19. Its message of companionship, love and warmth in difficult times gives it timeless relevance that so many of Dylan’s songs manage to find, and which may go some way to explaining his Nobel Prize for Literature.

Another brand-new item on this volume of The Library is Hushabye Mountain, the beautiful lullaby from the 1968 film-musical Chitty, Chitty Bang Bang – an adaptation by Roald Dahl of a book by the James Bond author, Ian Fleming. In the film, this Sherman Brothers song is sung by the inventor Caractacus Potts to his children at a sad point in the film’s plot. The arrangement was written specially for this recording by Blake Morgan, a friend of the group whom we know primarily through his work as a tenor in the vocal ensemble Voces8. After hearing us perform some of the older jazz arrangements in our library, he felt inspired to take the melody in an imaginative direction, bringing in irregular time signatures, tightly spaced jazz harmony and elements of vocal percussion.

The French folk song Une gente bergère (The sweet shepherdess) comes from the Auvergne – a rural and beautiful area of central France. This arrangement comes from a set of five folksongs from the region, arranged by an early collaborator with the group,Goff Richards. Goff was a prolific composer and arranger for brass bands and big bands in the UK, and translated some of the techniques and sonorities of brass band writing
into his arrangements for The King’s Singers in the 1970s and 1980s. The genesis of this arrangement of Sisotowbell Lane came after Pat first heard
Joni Mitchell’s 1968 song on a playlist whilst out shopping. He was mesmerised by the otherworldly nostalgia of the lyrics, with their beautiful internal rhymes and unpredictable metre. Playing it to his wife when he got home, she listened and didn’t stop humming it for days afterwards. Riffing on her humming, he began work on arranging it for the group, only later discovering the wonderful origin of the name ‘Sisotowbell’, which is in fact an acronym for ‘Somehow, in spite of troubles, ours will be ever-lasting love’, part of a ‘mythology’ of acronyms which Joni Mitchell used throughout her output.

Bob Chilcott’s arrangement of Texas Girl at the Funeral of Her Father interferes minimally with the beauty of Randy Newman’s original song, from his 1977 album Little Criminals. The lyrical string parts of the original are replicated in the lower voices, and the vocal line is given to the top voice. Randy Newman often gave his tracks unexpectedly long titles, providing the songs with a context to make sense of their lyrics. This song is a prime example, with the vocal part sung in the voice of a girl mourning her sea-faring father. The final track on this volume of The Library is a delightful firecracker, the famous musical theatre showtune The Rhythm of Life. It comes from the 1966 musical Sweet Charity, which had long runs on Broadway and in the West End. The music is by Cy Coleman, and the lyrics by Dorothy Fields – who, judging from this particular number, was being paid by the word! The King’s Singers first recorded it on their EMI album New Day in 1990, in this arrangement by Peter Knight (whose other brilliant arrangements for the group include Danny Boy and You Are the New Day). The arrangement makes great use of the ‘patter’ style, where the whole ensemble works as one instrument, synchronising fast-paced text and with the solo line passing around between voices from phrase to phrase.

From this archetypal King’s Singers arrangement, to brand new arrangements like Hushabye Mountain, we hope this EP is something like a tasting menu; one celebrating all that voices can do to give new dimensions to well-known songs.