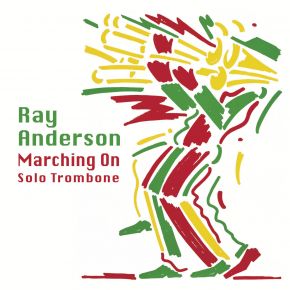 A trombone solo album is not exactly an everyday commodity, because the instrument is considered somewhat bulky, unwieldy and grumpy. In the hand of a master like Ray Anderson, however, one wonders how these prejudices could have come about, because he simply makes music with the trombone.

"I've had this idea in my head since I started playing solo concerts in 1982," Ray Anderson recalled. "Anthony Braxton recorded the solo record ‘For Alto’ in 1969, where the challenge of playing an instrument alone without accompaniment is particularly interesting. So why not on the trombone too? Albert Mangelsdorff has recorded beautiful solo albums, and that by George Lewis is also very inspiring.”

Ray Anderson was born in Chicago in 1952 – he turns seventy years old in October – and first became known in the band of Anthony Braxton. After that he played in a trio with Barry Altschul and founded the funk band Slickaphonics, with which he recorded several albums. He has also recorded records under his own name since the 1980s, often alongside European avant-garde artists such as Christy Doran, and he seems to have mastered all styles on his instrument. Nevertheless, he is always recognizable by his vital and powerful style.
"Marching On" begins with "Keep Your Heart Right" by his co-musician Roswell Rudd. “Roswell was a huge inspiration for everyone and, of course, especially for me,” Anderson said. "And I love this melody. I first heard Roswell in 1966 on the Archie Shepp record ‘Live in Francisco’, and they even played this song there for a short time. Since Roswell died a few years ago, I thought it would be a nice idea to start the album with this song – which by the way also has very nice lyrics.”
Anderson dedicated the title song of the album to politician and activist John Lewis. “John Lewis was a great, inspiring figure in the civil rights movement and a close confidant of Martin Luther King,” the trombonist recounted. "I met him once and was even able to play something for him; which is how this composition came about. I learned from him how to be human. He served in Congress for forty years and always stood up for equality and justice.”
A rarely played song by Duke Ellington is "Just Squeeze Me". "I learned the song from Art Baron, who played with Duke Ellington himself, but also for people like Stevie Wonder and Bruce Springsteen. He is a great trombonist with whom I have often played in a duo. ‘Just Squeeze Me’ is a conversation between two people, and I wanted to make that clear in my version."
In addition to other originals and selected cover songs, the album ends with Henry Mancini's "Moon River". "The song is my wife's favorite one," Anderson stated succinctly, "and that's why it's dedicated to her and is a love song in this case."
“Marching On” is a journey of sound that leaves the listener astonished, because Ray Anderson manages to give space to many different moods with his instrument and trickle music into the listener's ear, in which one often forgets that you are “only” listening to one trombone – the album seems like the sum of a turbulent career.
“The challenge is: How do I make sure that not every song sounds the same?" Ray Anderson asked himself. "I only have one instrument available. So I wanted to make sure that the album is full of contrasts. I wondered how many ways I could play the trombone and how many different moods I could create. It was supposed to be a fascinating experience for the listener. If you really love a song, such as ‘Equinox’ by John Coltrane, I want to make the harmony of this song clear without having any harmonies at my disposal. That's why I improvise on the harmonies and hope that you can hear them."