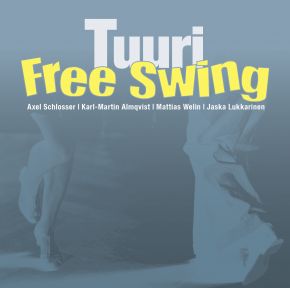 You might think that Free Swing is a fitting name for a jazz quartet, but there is actually more to it in the case of this international band of four; the two words are composed of the internationally customary abbreviations of the countries of origin of the protagonists: Trumpeter Axel Schlosser comes from Germany (GER), tenor saxophonist Karl-Martin Almqvist and bassist Mattias Welin from Sweden (SWE) and drummer Jaska Lukkarinen from Finland (FIN).
Of course, Free Swing also stands for the music of the quartet: "We play music that swings," Axel Schlosser put it in a nutshell, "but it is very freely designed.”
The four musicians came together on long, winding paths. “I know Karl-Martin from the JazzBaltica-Ensemble, and I met Jaska on a tour with the EBU big band,” Axel Schlosser recounted. "We also met again and again by chance, in Stockholm and elsewhere, and at some point the two of them told me about their band with Mattias, for which they were looking for a fourth musician. That's how I joined them, and we went on tour in Sweden for the first time. Most of the recordings of the album were made during our first meeting.”
That certainly was a lucky coincidence and that's exactly what the Finnish term “Tuuri” means, which gives the debut album its name. The four musicians are well-established protagonists of the European jazz scene. Axel Schlosser has been the soloist of the hr big band for twenty years and also maintains his own ensembles. He recently released the album "To Satchmo and Duke” with his quartet.
The Swedish tenor saxophonist Karl-Martin Almqvist has already released four CDs with his own quartet, has collaborated with Pat Metheny, Dave Liebman and Dee Dee Bridgewater and was part of the Norrbotten Big Band and the Danish Radio Big Band in Copenhagen. “Many Swedish friends call Karl-Martin the bear,” Axel Schlosser said, "which is due to his appearance. But he actually has his heart in the right place. In addition, he has a very individual sound on the tenor; you know that it is him after three or four notes."
Mattias Welin has been a sought-after bassist on the Scandinavian scene for years. “He is a thinker who always has a good overview,” Axel Schlosser said. “He observes everything quietly and pays attention to how things fit together. A fantastic bass player who provides a great foundation and also composes beautiful pieces.”
Jaska Lukkarinen first learned accordion and piano when he was a young child, but then quickly decided that he wanted to play drums. He was influenced by drummers such as John Riley, Adam Nussbaum and Ari Hoenig, from whom he learned his trade. “Jaska is a very spirited and lively guy,” Axel Schlosser stated. “He has a certain unpredictability, both as a person and as a drummer. This keeps our music fresh, because he never plays a piece twice in the same way.”
And the music of Free Swing really sounds fresh; the four musicians whirl through eleven tracks with a lot of energy, all of which are their own compositions except for one Brahms arrangement. "For all four of us, the band is a project that is close to our hearts”, Axel Schlosser stated expressing his pleasure about the album, "and we have already had wonderful concerts in Finland, Sweden and Germany.” The songs are not only vehicles for improvisations, but also captivate with original themes such as the Latin influence in Almqvist's "Welin in Acapulco" or the beautiful ballad "Near Birches, Birds and Bees", which Axel Schlosser composed. A piece by Axel Schlosser, with which the album closes, proves that Free Swing, despite its enthusiasm for freedom, has also preserved a heart for tradition: “If There Is No Blues…”