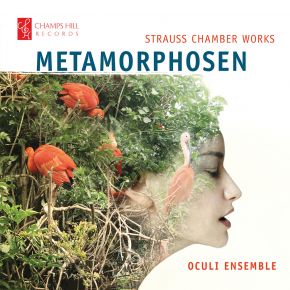 The Oculi Ensemble is a flexible string ensemble dedicated to performing and discovering the breadth of string repertoire for combinations from two to seven players.

The Ensemble is derived from internationally acclaimed musicians from such leading quartets as Badke, Doric Piatti, Navarra, Albion and Idomeneo.

For their debut release as a standalone ensemble, The Oculi Ensemble presents chamber works by Richard Strauss, ranging from his iconic Metamorphosen (from which the recording takes its name) to some of his lesser-known chamber works, including his early String Quartet Fragment which was tantalizingly left unfinished.

Leader Charlotte Scott comments: “This disc has been a real labour of love. From the Oculi Ensemble’s inception the group wanted to explore the breadth of instrumental combinations of Strauss’ chamber works. We spent a hugely enjoyable time recording at Champs Hill, and we enjoyed the journey that each day took us on, emotionally and musically. We hope that the disc enables you to join us in the Oculi Ensemble’s appreciation of the glorious chamber works of Richard Strauss.”